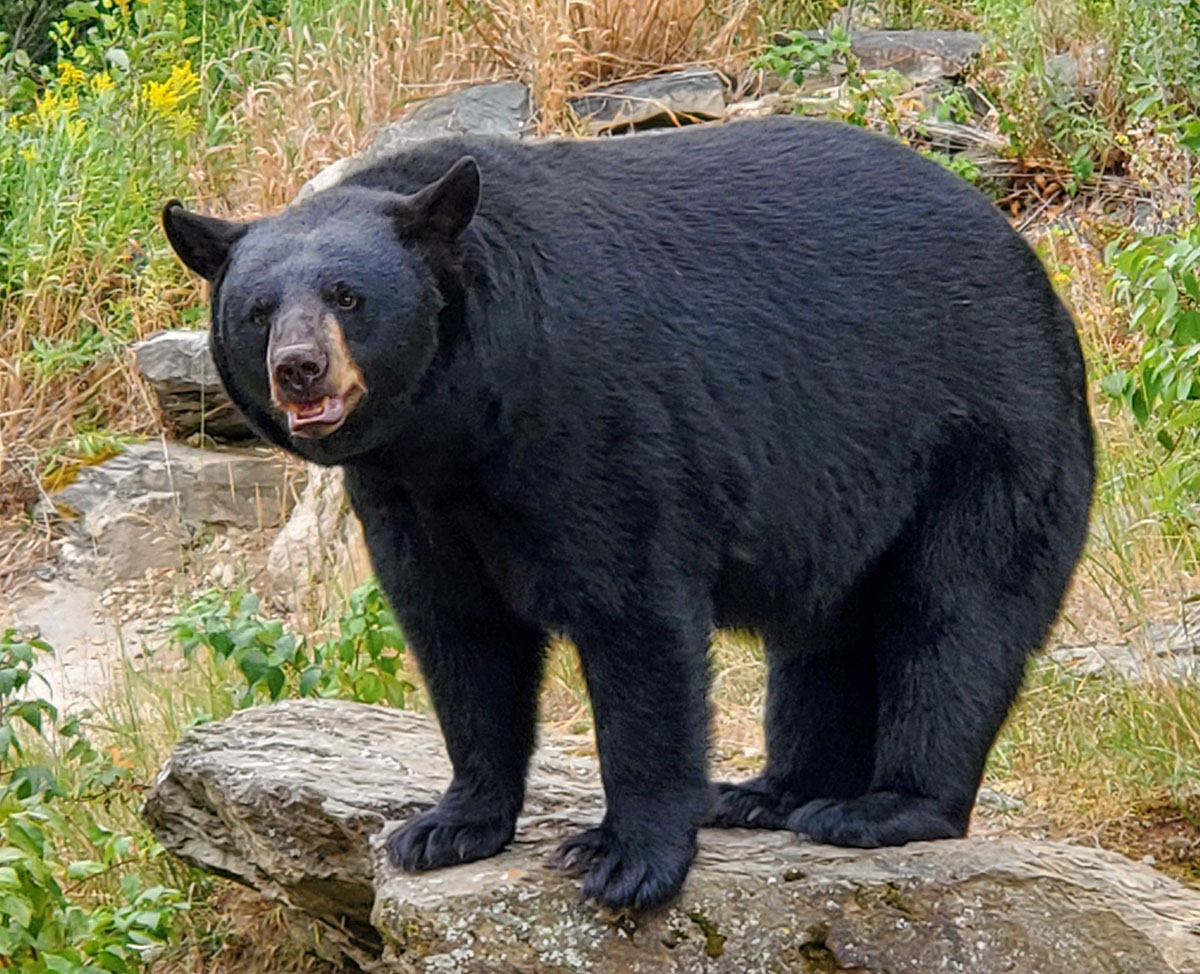 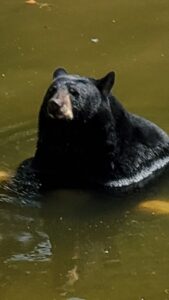 The Bear Center began new hours yesterday: August 29th – October 24th we will be open from 10:00am – 4:00pm.  We will also be open the same hours on Labor Day. We are thrilled we received some rain yesterday. It is great to see water in the overflow creek and more water in the pond!

As we opened yesterday a group of 9 firefighters visited the bear center. We couldn’t thank these brave men and women enough for all they are doing to keep us safe. We were happy to provide them complimentary admission.

Note: I will not be sharing bear weights going forward, as our Hibernation Contest is underway. You can place your guess for each bear’s hibernation weight and date on our Facebook page. Click here to post your guess.

Bear fact: The vomeronasal organ (VNO), or Jacobson’s organ, is the paired auxiliary olfactory (smell) sense organ located in the soft tissue of the nasal septum, in the nasal cavity just above the roof of the mouth (the hard palate). A bear’s nasal mucosa area is 100 times greater than humans allowing them to take in smells from afar.

The biggest question on everyone’s mind is are the bears being affected by the smoke from the wildfires both north of Ely in Canada and south of Ely? So far there has been no observed behavior change in the bears. Bears have a magnificent sense of smell.

In one particular case a research bear moved 40 miles to a hazelnut area after the wind changed carrying the scent. Researchers took to the air to find her and her cubs enjoying a feast of hazelnuts. She traveled 40 miles to get to them.

Ted’s big adventure this week – during the live broadcast on Thursday, Ted rested just beyond the camera view. He raised his head to see what was going on but didn’t get up until the broadcast was over. This seems to be when the bears here recognize that it’s time to come to the viewing area, just after the broadcast!

Ted is sporting a somewhat ragged look these days. He is shedding his fur in great clumps and it is scattered from his den and enclosure to around the areas in which he frequents when he’s out.

It seems Tasha is very happy when she doesn’t have to watch for Holly as she enjoys her time out in the big enclosure. Neither of the females can run for a long period of time due to their weight gain. Both females continue to work on dens but I was told Holly has been checking out the dug den near the bunkers. Is it likely she’ll take that one now that Tasha has shown interest? Time will tell.

Holly, it is such a delight to see her out and about and her ears forward. It doesn’t happen a lot but she can get her ears forward when she is being called and a treat awaits her. She has been actively preparing the den furthest away from the bunkers, but as I mentioned, she has been checking out the den past the bunker dens too. She likes to ambush Tasha by hiding in wait around the brush and bushes. The chase doesn’t last long due to the extra weight. It’s so nice to report that all the bears are healthy and doing well.

Lucky bear just lumbers through his day, he swims, enjoys apples in the pond and then he naps, usually in the small bunker. He is very good about putting himself in the cabin den when he’s had enough. Holly pays him little to no attention and it’s just as well. I sometimes wonder why he doesn’t like Tasha. He spends time watching her. Lucky totally enjoys the brazil nuts that were sent from Amazon. It’s his favorite treat. He also likes his raw egg in the morning but he doesn’t like it if it is broken.

I’ve added a few extra pictures of an eagle and its mate soaring over the bear center. Little Chewy isn’t so little anymore. The woodchuck family moves quickly into the rock den when any of the bears are called. I get a chuckle out of calling Holly, the woodchucks really scoot when her name is called.  The little chipmunk in the bunkers was trying hard to get the watermelon rind out of the bear food dish. It couldn’t get it out so it began eating.

The wish list for the bears is still on Amazon smile if you are looking for a quick way to donate to the bears. I thank you all so much for sending dried fruit and nuts. It makes a huge difference in the treats for the bears and additions to their dinners. Click here to check out our wish list on Amazon.

Have a safe Labor Day weekend.